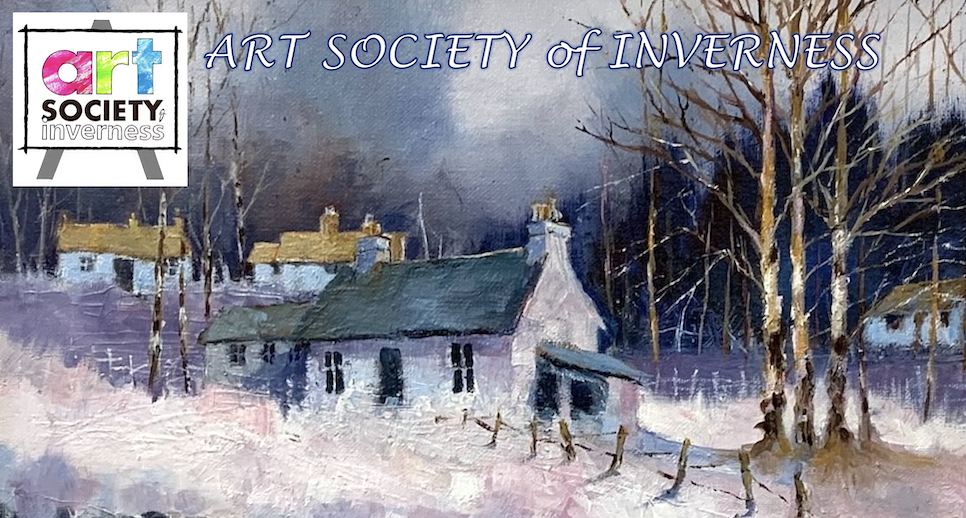 THE HISTORY OF THE ART SOCIETY OF INVERNESS
by Margaret McKay

The Art Society of Inverness was founded in 1944,  its stated aim being "to encourage artists, amateur and professional, in Inverness and the North, and to bring about the increased interest and understanding of art and sculpture."

The first president was Gladys Barron, the wife of Evan Barron the owner and editor of Inverness Courier, and herself a well-known sculptress.

Sir D. Y. Cameron, the famous Scottish artist, agreed to be the first Honorary President of the Society.  He believed that there should be a permanent collection of paintings in Inverness, and was to have donated some of his own works, but died in 1945 before this happened.  Sir William Gillies, who had a long association with Inverness, having taught at Inverness Royal Academy, became the second Honorary President.  Until his death in 1973 he was of the greatest help and support to the Society, giving many lectures and often visiting the annual exhibition.

From 1944 till 1974 annual exhibitions were held in the Town House.  To start with they were very small but soon grew in size until in 1974 there were 226 paintings exhibited and 5000 visitors to the exhibition.  (Incidentally that year the cheapest painting on sale was £3 and the most expensive was £40).  With regionalisation the Town House became prohibitively expensive and the exhibition was moved to Dr Black's Hall and continued there until 2007, when it moved to the Eastgate Centre.  This has proved to be an excellent venue for several years, but we were delighted to be moving back to our home in the Town House for the 2015 exhibition.

Over the years other exhibitions have been held, notably in Eden Court Theatre and Inverness Museum, but the annual exhibition remains the highlight of the Society's year.